Baby it's Cold Outside!


Temperatures have really dropped but of course we are a month into winter.  One of the differences between North America and South America that we've talked about in the past is the strangeness of having Christmas in the heat of summer.  Also, Thanksgiving is not a holiday here so we need to be intentional and "make it happen."

Yes, one of the things I've always appreciated about our winters back home in the states is that at least there was Thanksgiving and Christmas to look forward to.  In the Patagonia, we have long winters with no Christmas . . . hmmm, maybe Aslan will come and warm things up a bit. :-)


By the way, did you notice who was playing in the World Cup?  That's right, we were there.  Semi-finalists!  Yep, we're proud of our boys. Most towns in Argentina become ghost towns during the games as people gather in front of their TVs to cheer for their team.  Soccer (or futbol as it's called here) is huge in Argentina, as you could tell if you watched them play at the World Cup.  The national pride kicks in and emotions run high.  It's contagious!  We were in front of our TV screen as well.  Well,  enough about that. 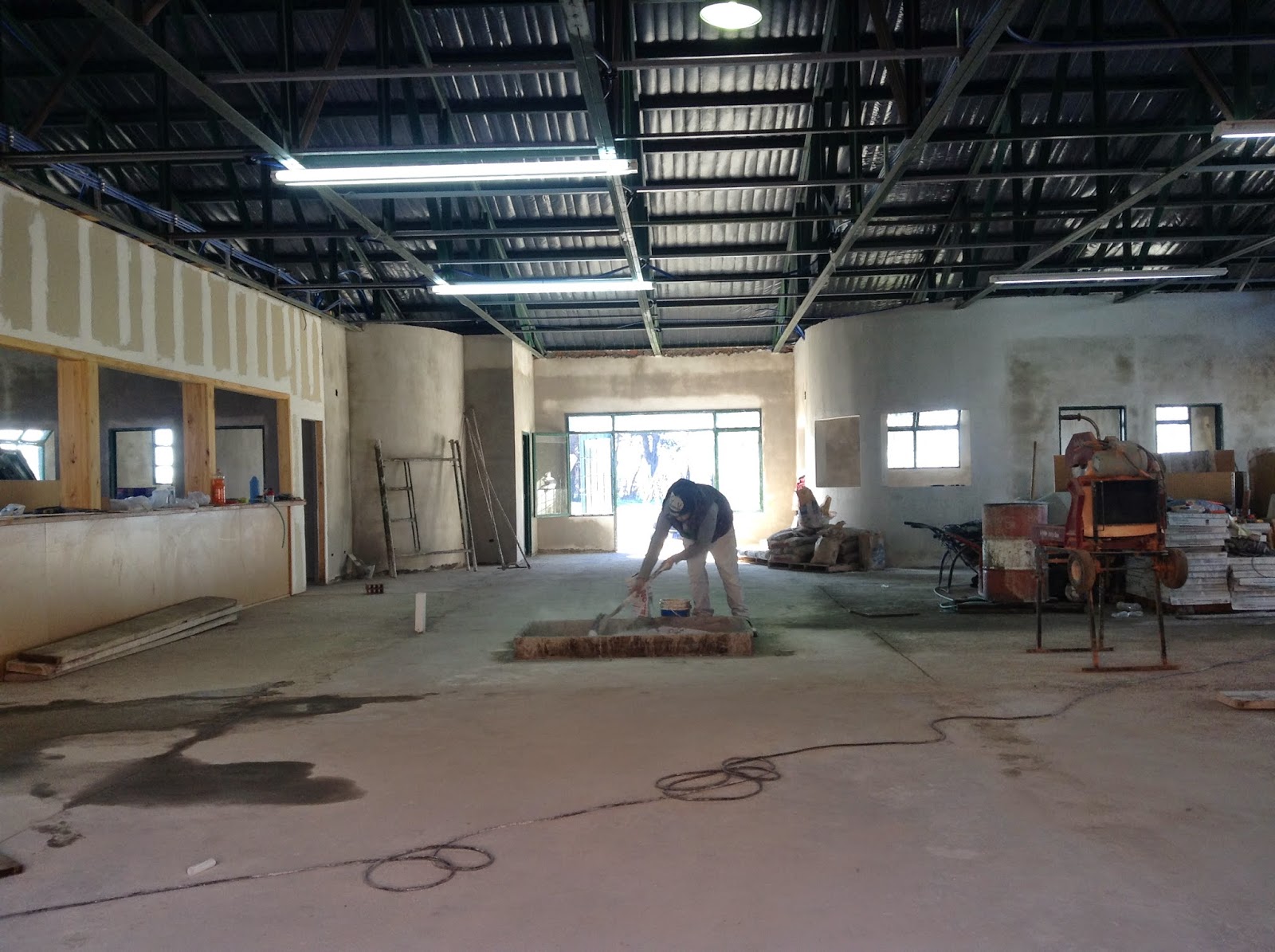 Although is been cold and a lot more quiet since classes ended last month, the activity in the area of construction continues going forward.  The inside of the library is coming along nicely and it won't be long before we have a new 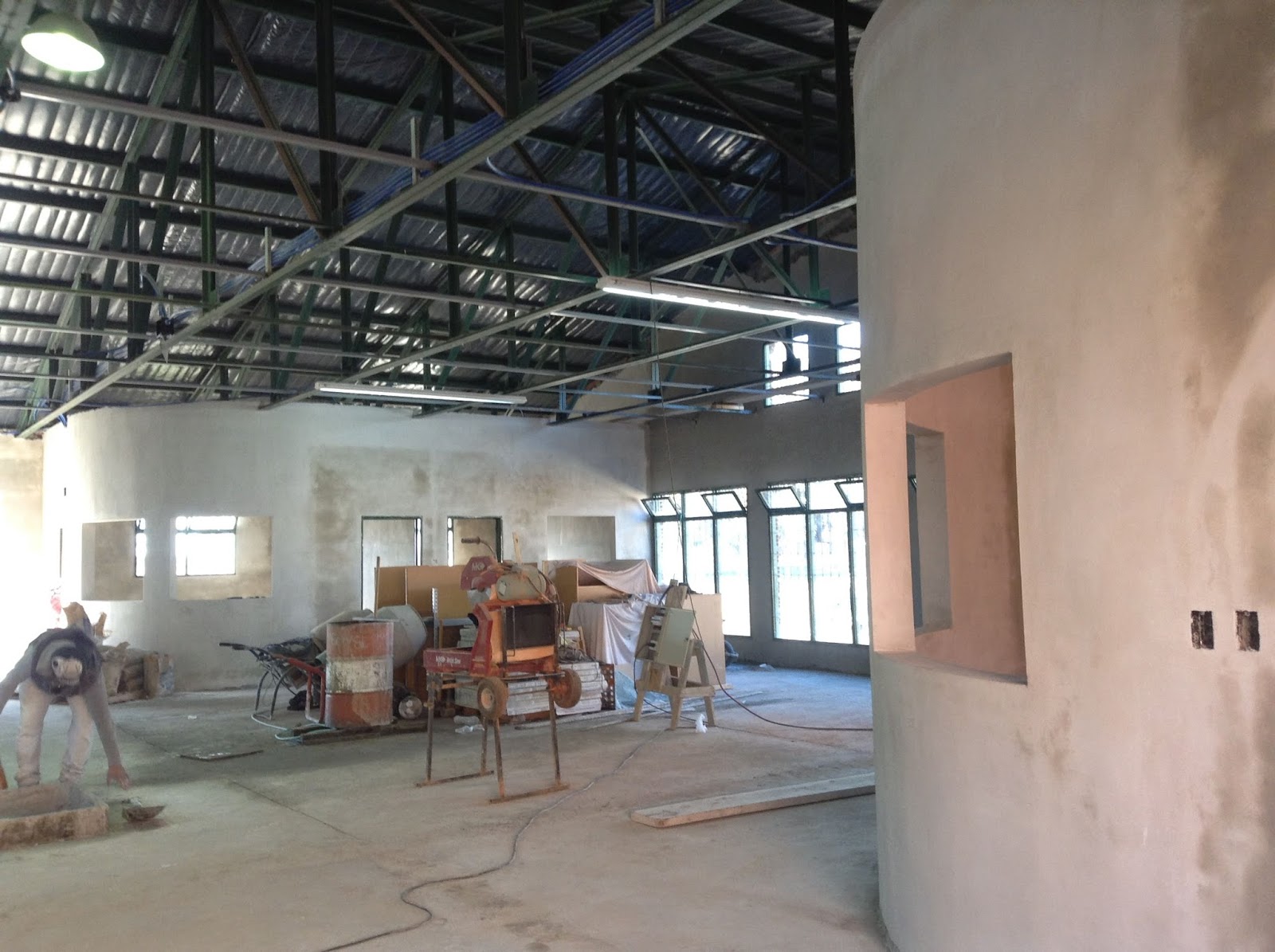 user friendly and modern library.
Currently, the inner walls are being finished with the fine plaster coating known as "revoque" in Spanish.  After the revoque, the next step will be to do the flooring.  The heating system needs to be installed and there is also a small bathroom in the library office that will complete the bulk of the work.  Lighter work will be the painting of the walls and the drop ceiling; jobs that teams have helped us with in the past.  Would you or a team from your church be interested in coming to help us with that in February or March 2015? 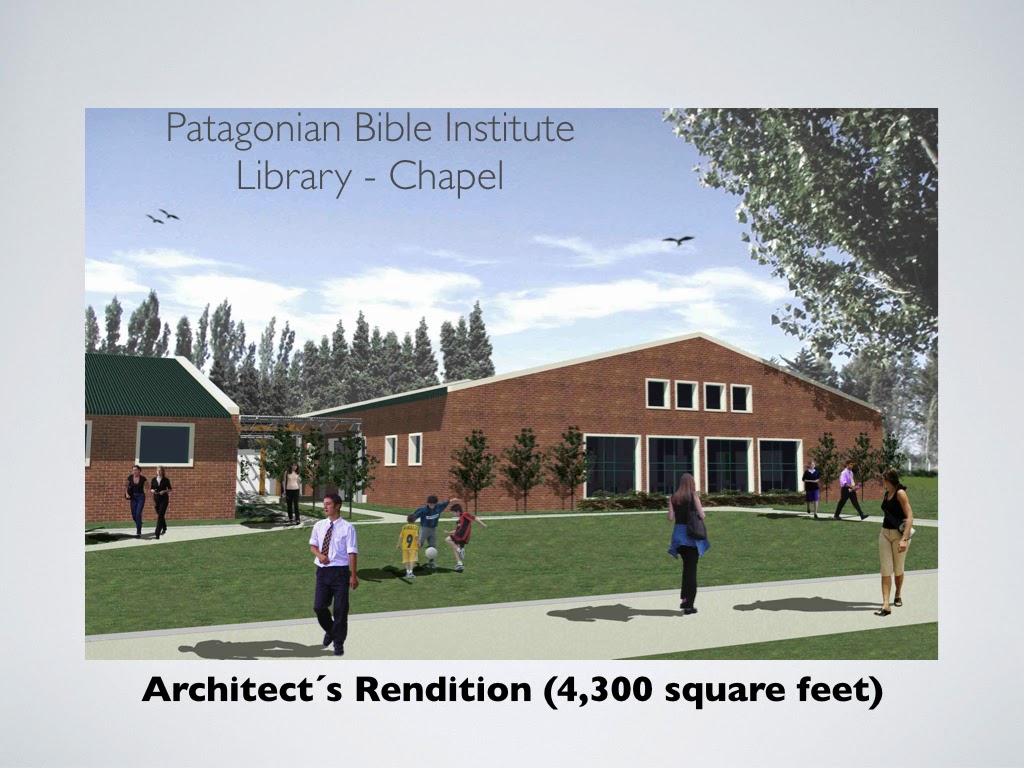 Of course, the outside walls will need to be finished with brick, but that will not impede the use of the library once the inside is completed.  Which brings to mind the dorm building which still lacks it's outer brick finish.  Here's what the library will look like when finished.  This is getting exciting as we are starting to see that the end is in sight.  This library has been a long time coming and is so needed, especially with the higher student enrollment we are seeing. 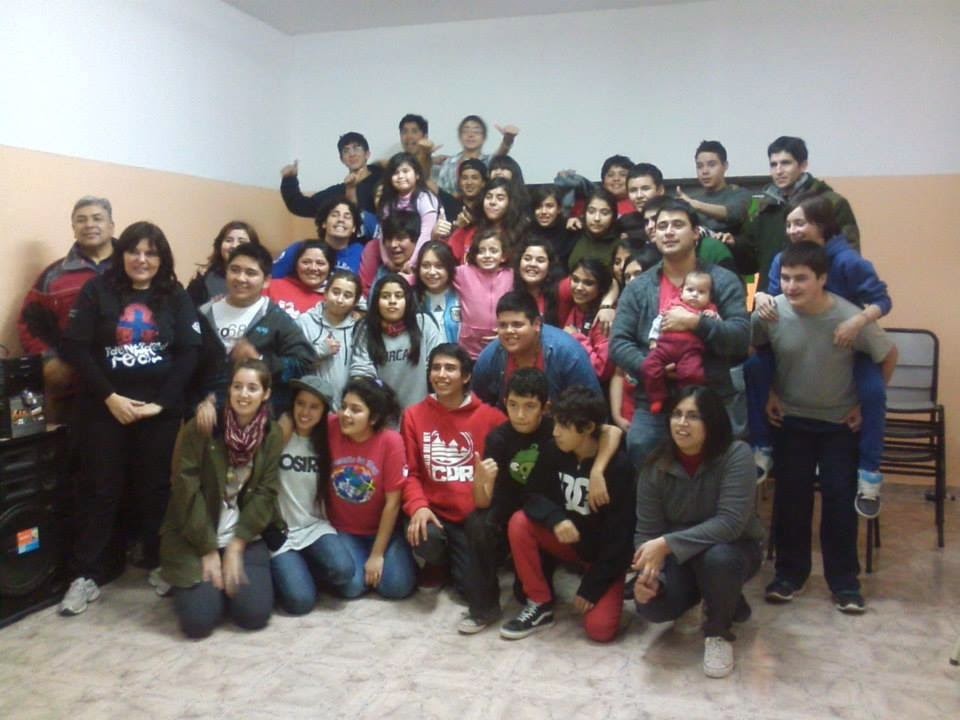 In the days immediately following classes we were privileged to host five leaders of the national King's Castle Ministry from Buenos Aires.  They were here to train up a new crop of young people for King's Castle and to support and encourage the older "veteran" Castle kids, of which Jeremy is now a part. 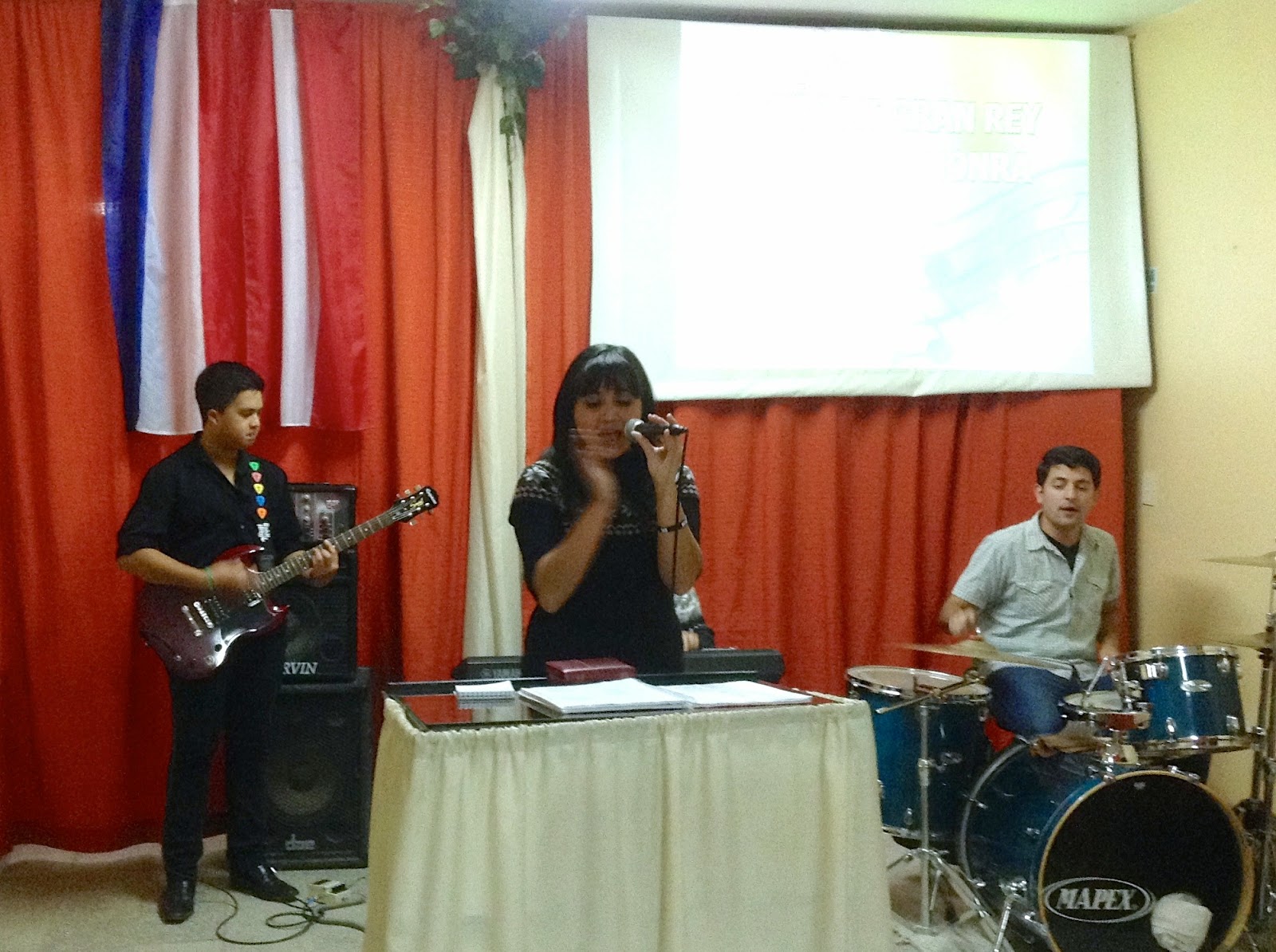 It's a joy to see him involved in this evangelistic and discipleship ministry in addition to his involvement with the worship team at church.  We are enjoying him as much as we can because we know it won't be long before he flies the coop just as his sister did earlier this year.


Speaking of his sister, Felicia is adjusting quite well to her new life in California. She is well into her internship at our home church in Rocklin, and as part of her work there, she will be helping lead a team of youth on a mission trip to Honduras later this month.  She loves what she's doing and is very excited. 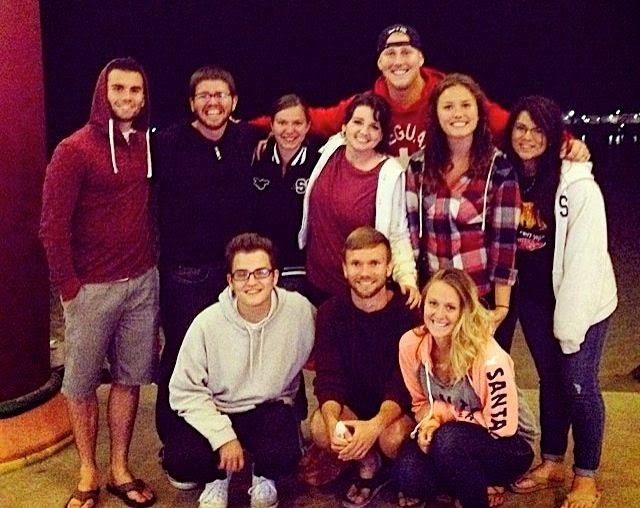 Also, in an unexpected turn of events, it turns out Felicia will be attending William Jessup University in August.  It is a Christian liberal arts college very close to where she is living in Rocklin, CA.  This was such a pleasant surprise but we can definitely say it was a God thing as doors in one direction were almost slamming shut and the door to Jessup was opening wide.

MINISTRY in the HOME CHURCH

During these "in between" months, we've also been able to focus on and be involved in our home church.  During class sessions, IBP becomes, not only our place of work, but also our church.  Because of our isolated location in Patagonia, we have our own church services on Sunday evenings for the student body.

So it has been good to return to Sunday services at our local church here in Gaiman.  It also has been good to partake in the life and activities of the church.  Eddie has already preached on one Sunday evening and also at a Saturday evening youth service. 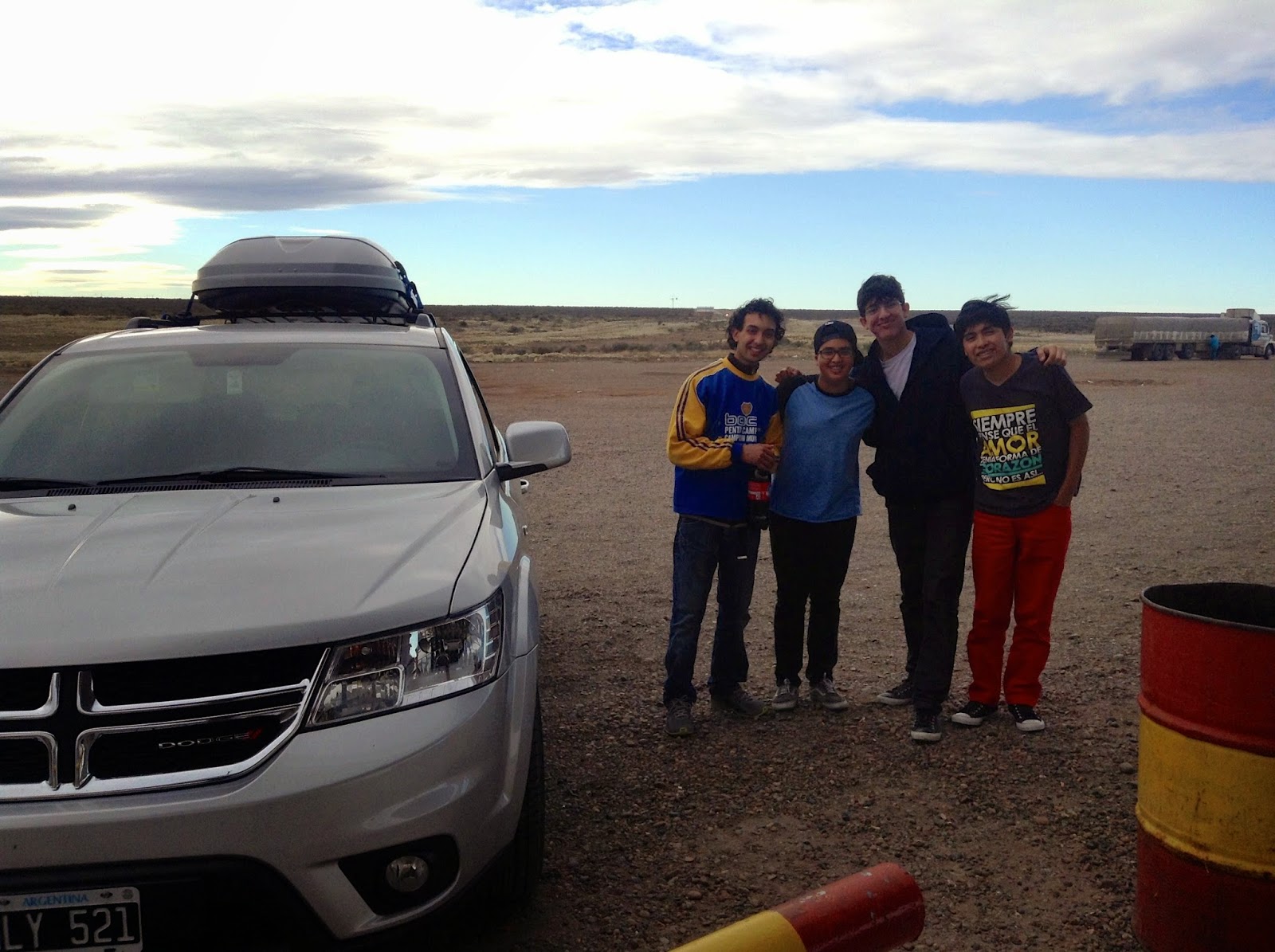 This weekend we will be taking a handful of young people to youth camp in a town three hours south from where we live.  We are so thankful for our Speed-The-Light (STL) car that allows us to serve in ways like this. Plans are also underway to travel South and West to visit our alumni who are pastoring churches in the cities of Lago Puelo and El Bolson.  They are indeed brave souls who venture to the coldest parts of our world to be a light in the darkness.  We praise God for our students who graduate and then follow God's leading to the uttermost parts of the world.

The theme of our Bible School, by the way, is "From the Uttermost to the ends of the earth."

Posted by Echevarrias in Argentina at 1:11 PM No comments: Links to this post 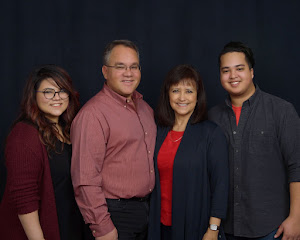